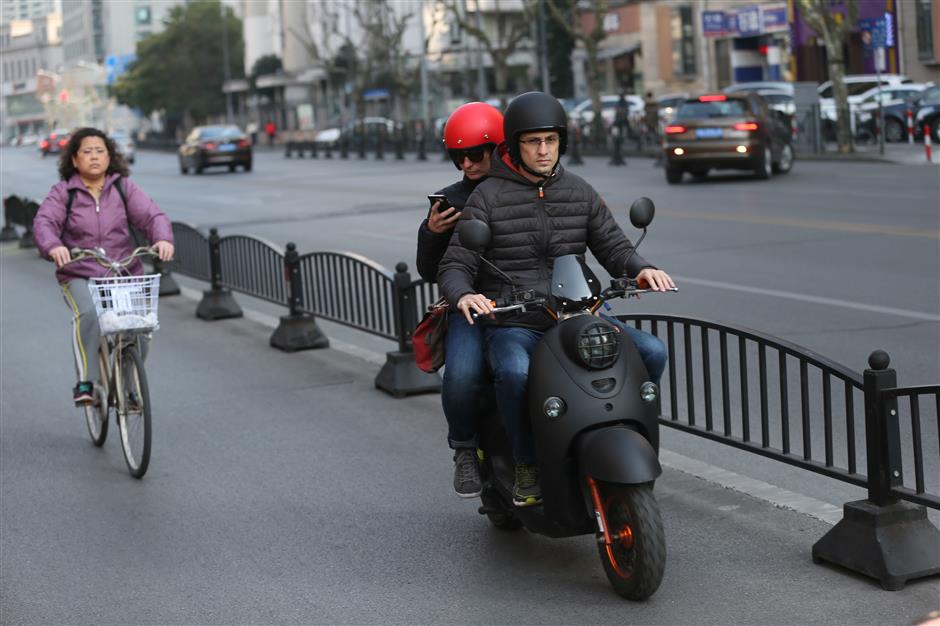 Two adults riding an e-bike is against the law, but it doesn’t stop some from doing just that — including foreigners.

Shanghai’s government recently released the stats for accidents, injuries and deaths involving e-bike riders last year, and to put it bluntly it’s really peed me off. That’s why today I’m going to sound like that moaning foreigner.

The reason I’m so annoyed by this is probably because I, as a sometime e-bike rider and frequent pedestrian, could have easily predicted it. E-bike riders are often blase about breaking the law, and seemingly unaware they’re even doing anything wrong when they do so.

One of my pet peeves is when they run red lights, which in 2018 contributed to the 10.2 percent increase in deadly accidents brought about by illegal maneuvers. They do it all the time, often forcing pedestrians and other motorists to take evasive action just to avoid being hit.

Zipping down footpaths at full speed, horns blazing, is another e-bike action that makes my blood boil. Is it really so hard to realize that footpaths are designed for pedestrians? If you’re riding a bike there you need to realize you’re a guest, you don’t have the right of way, and for Bob’s sake slow down.

The other thing that really gets to me is when e-bike riders ride in the wrong direction, against traffic. This behavior has led to many accidents in Shanghai even though, for me, it seems obviously wrong and obviously dangerous. I’ve blocked riders coming at me in the wrong direction on multiple occasions and tried to have a word with them about what they’re doing — they either stare blankly or try to argue with me. Either response is pathetic, not that they actually owe me one.

And it’s not just locals who ride with blatant disregard for their own safety and the safety of others — foreigners are just as callous. Perhaps it has something to do with that famous idiom ru xiang sui su (When in Rome).

Just recently, Shanghai traffic police caught a bunch of foreigners riding e-bikes with adult passengers on the back. That’s illegal, whether your bike has an extra seat or not.

But they’re not just guilty of biking with friends. “E-bike offences by foreigners include not having a plate, riding in a lane with traffic from the other direction and ignoring red lights,” officer Zhu Weiting told Shanghai Daily.

New laws are coming in next month specifically relating to e-bikes and their specifications. One is a set speed limit — 25 km/h — that is no doubt aimed at lessening injuries and deaths when accidents occur. Currently, e-bikes riding in the city are not allowed to exceed 15km/h, although that is never respected.

In February this year, a female rider speeding through a red light in Hongkou District was hit by a bus and killed. She was traveling at 26 km/h. Earlier, in January, another speeding female rider was killed after running a red light and skidding under a truck.

Something has to change and clearly the status quo isn’t working.

I think something that would really help would be if people stepped out of their comfort zones and confronted riders who blatantly put themselves and others in danger. Block their way, remind them that what they are doing is illegal and tell them that exactly what they’re doing is leading to more and more deaths each year in Shanghai.

You won’t be popular and you’ll probably feel like you’ve finally become your moaning grandfather, but you might just make a difference.