Is this the end of the MacBook Pro? 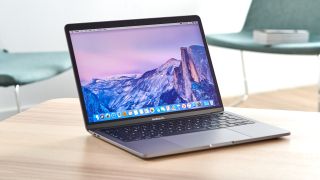 Is this the final curtain for the MacBook Pro? (Image credit: Future)

Apple’s MacBook range became a lot simpler to navigate last year, with the discontinuation of the 12-inch MacBook leaving just the MacBook Pro and MacBook Air. But if new rumors are to be believed, the choice could soon become even simpler for creatives – and it’s all thanks to Apple’s new silicon chips.

Apple announced at its WWDC conference last month that it will be switching to its own custom-made silicon processors, having previously relied on those made by Intel. Offering “world-class” performance and power, according to Apple, the new chips will no doubt help the MacBook Pro hold on to the top spot in our best laptops for graphic design list. But they could also see the MacBook Air and MacBook Pro combine to become a single product.

Tech website SonnyDickson has speculated that thanks to Apple silicon, it would make sense for the brand to consolidate its MacBook lineup under a single moniker: ‘The New MacBook’ (or perhaps simply ‘MacBook’). In short, we might soon be able to enjoy a MacBook with the power of the Pro, and the portability of the Air (‘MacBook Pro Air’?) (‘MacBook Prayer’?)

Currently, the main difference between the Pro and Air models is that the latter’s processors are more efficient and thermally friendly, allowing for a thinner body. Apple’s new chips could offer incredible power whilst also requiring less cooling (and therefore fewer fans). “If you can make a MacBook Pro practically as thin and light as a MacBook Air, asks SonnyDickson, “why would you not do that?”

With the ‘Pro’ line synonymous with power and performance, digital artists might be nervous to see it go. As well as being a top machine for graphic design, the MacBook Pro is one of our best laptops for video editing. But if that same performance is available in a slimmer body, the New MacBook could be the perfect device for creatives, removing the need to choose between portability and power.

Time will tell whether Apple is planning to consolidate the MacBook line up, but if its new silicon technology does indeed allow it to offer Pro performance in an Air-style chassis, the idea of combining the two products seems to make a lot of sense.